When the C64 was launched by Commodore in 1982 it immediately set the standard for 8-bit home computers. Its low cost, superior graphics, high quality sound and a massive 64 KB of RAM positioned it as the winner in the home computer wars, knocking out competitors from the likes of Atari, Texas Instruments, Sinclair, Apple and IBM.

Selling over 30 million units and introducing a whole generation to computers and programming, the C64 shook up the video games industry and sparked cultural phenomena such as computer music and the demoscene. In recent years the C64 has enjoyed a spectacular revival manifesting itself once again as a retrocomputing platform. 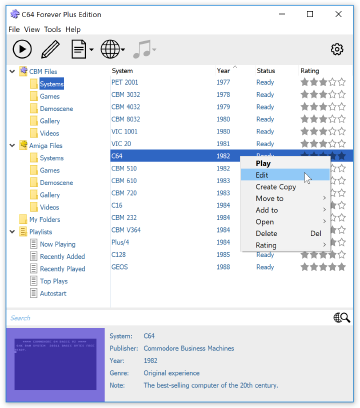 To allow you to experience and relive the wonders of this unique computer, Cloanto, developers of Commodore/Amiga software since the 1980s, has introduced C64 Forever, the official CBM 8-bit preservation, emulation and support package. C64 Forever embodies an intuitive player interface, backed by a built-in database containing more than 5,000 C64 game entries. Support for the innovative RP9 format allows for advanced title authoring, preservation and easy cross-platform playback.